Memories of Azeroth, the special raid celebrating the 15th anniversary of WoW, was quite different than the LFR version of Molten Core that was part of the 10th anniversary celebration. Having three wings instead of one long instance is huge in opening it up to more players, and I think that’s a good thing. Molten Core LFR was tuned too difficult in my opinion: casual players should be able to experience an anniversary celebration. The tuning on Memories of Azeroth felt very much in line with LFR. There were wipes, but groups could consistently finish it.

The idea behind the raid was pretty fantastic. Three wings, each featuring one of the first three expansions in World of Warcraft. As far as I know, this is the first time WoW has had a sort of boss rush too. In each wing, all three bosses had to be downed without wiping. However, you only see certain phases of the bosses and not all. Between bosses, all CDs are reset, and anyone who died is rezzed.

What seemed off to me was that some fights were so boring and easy that I never saw a wipe on them.

Memories of Fel / The Burning Crusade: Lady Vashj, Kael’thas, Archimonde. This was the easiest wing. I’m not sure I saw a wipe on Lady Vashj or Kael’thas. If so, I didn’t see many.

Memories of Frost / Wrath of the Lich King: Heigan, Anub’arak, The Lich King. This was the weirdest difficulty. Heigan should be incredibly simple. The “dance” of the fight is to simply stand in the one safe quadrant, moving with the group. The safe quadrant shifts in order. But there were wipes. Then there’s Anub’arak. Not only were there definitely no wipes, but there was no challenge at all. That fight is incredibly boring. And then we get to The Lich King, with many, many wipes to defile. Aw, the memories. Wiping is frustrating, but adding some challenge made it fun, and calling out defiles and teaching people was satisfying. Anub’arak was the worst part of this wing. It felt like a waste of time.

Memories of Fire / Cataclysm: Cho’gall, Nefarian, Ragnaros. This wing mirrored the last one pretty closely, except Cho’gall is much easier than Heigan. I’m not sure if we had wipes on him or not. But Nefarian… I don’t even think I saw any mechanics because it was so simple. However, the room filling with lava and later draining made a fun sort of timer so we could be in a DPS race with out past selves in an effort to do better than last time. Ragnaros was challenging for some people, and I don’t mind some wipes as people learn an encounter.

It was a nice stroll through past memories and it makes me long to see full versions of some of those fights. Complex, multi-phase fights felt gutted. I miss the rest of Arthas! Memories of Azeroth makes me with we had more timewalking raids – but broken into wings so I don’t have to do them in one go like Black Temple or Ulduar.

And for my trouble – an Obsidian Worldbreaker! Who wouldn’t love a Deathwing mount of their own? It’s pretty cool!

The best part of patch 8.3 releasing last week is the availability of three alpaca mounts! I obtained my first last night, the Elusive Quickhoof alpaca. Look how cute it is when it does its /mountspecial animation, bouncing in a little a circle. I’m pretty happy with it! Now I’m still farming the second one :)

I hope everyone had a happy Feast of Winter Veil! This is me as Tyyrse on the left and gem as Diko on the right getting festive in Korrak’s Revenge.

We also visited the snow globe in Orgrimmar. This was me as Faiella and gem as Melantho but under transformations anyways.

The sleigh was a nice addition to the holiday this year, but the Horde version stopped early. It wasn’t spawning at all on the last night even though the on another server where I play Alliance was spawning in Ironforge still. This was the best picture I have riding it – me on Tyyrse and gem on Diko. 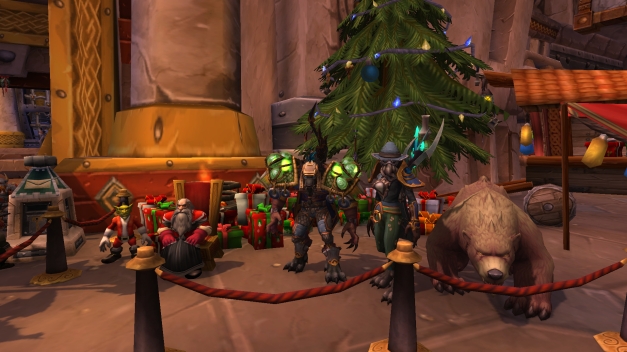 Here’s me as Kavax and gem as Xanau (and my awesome bear, Albert) meeting Greatfather Winter in Ironforge. 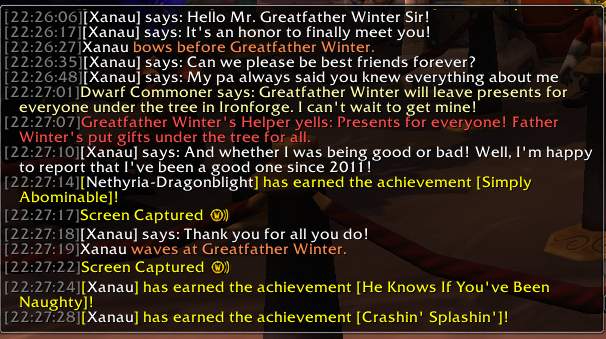