Remember how I talked about 4.3 the other day? Well, I did some stuff before 4.3 as well.

Mooglegem and I checked out the view of the Molten Front. We were kings of the Spider-Hill on our Flameward Hippogryphs.

We finally finished the Molten Front too except for one pesky achievement. Where’s Mankrik is much more annoying than Where’s Waldo. 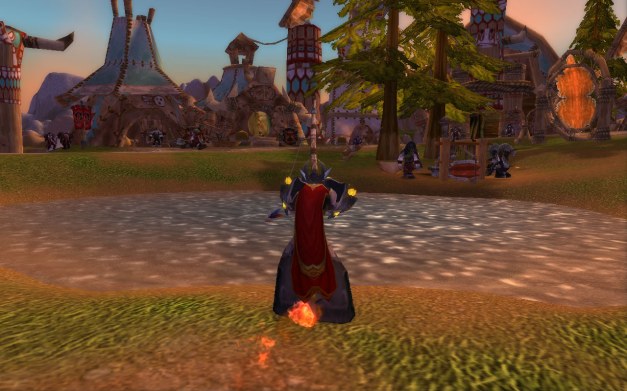 Those tauren gave me this big bean dinner, and my stomach didn’t like it.

With Molten Front out of the way, we decided to start doing Tol Barad dailies. Mooglegem would sometimes get stuck in a tree after we slow fell from a tower.

“I claim this tree in the name of Carpe Flux Capacitor!”

While we were questing, preparations began for the next battle. Mooglegem got teleported outside of the hold, but I was stuck inside. However, she was still within Tol Barad. I hearthed out to meet up with her again, but I guess they close the gate to Tol Barad from the peninsula. Then she had to teleport out as well.

During our raid, our tank, Craca, tried to fly away!

For some reason, I was floating above my mount in Uldum. I checked, and it only happened in Uldum, and only with my interface enabled. I use an addon called DragViewPort to change the viewable area of the screen (to create a black rectangle at the bottom). For some reason, this wasn’t compatible with Uldum.

Mooglegem and I eventually did all the Hellscream’s Reach dailies and earned exalted! While there are still more things to purchase, we got what we really wanted – spectral wolves.

After rolling over a bunch of enemies in Uldum, we earned Kata-Mary crowns! What a sweet quest!

And I think that’s almost everything I failed to talk about previously!