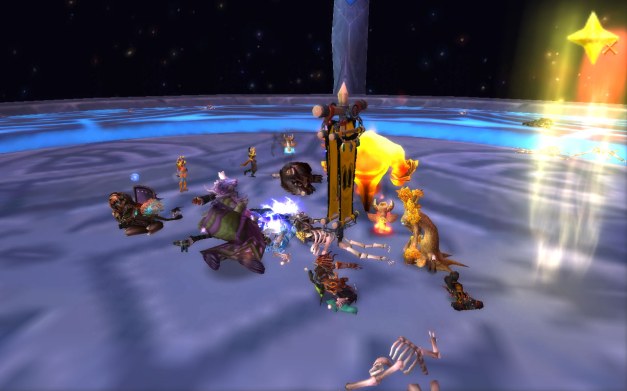 This week we managed to kill Hagara and Ultraxion! It was only our second time killing Warlord Zon’ozz, and we one shot him with no problems. That alone made me happy. Then it was on to Hagara. We did wipe a few times to placement in the non-primary phases, but she was still very easy. It’s very similar to LFR. Of course, we have to be more careful about losing people to ice walls. Also, we have to make sure to break people out of ice tombs. My only issue was that I had to pay attention to ice tombs to keep the tanks from getting LOS’d.

Ultraxion was bit of a bigger problem I think, even though I expected him to be easy. Luckily I never screwed up Heroic Will, but mistakes were made. I don’t remember one person in particular having continually trouble. Rather, I think different people would slip. Overall, a very easy fight.

I don’t imagine us ever again getting stuck on Warlord Zon’ozz, Hagara, or Ultraxion. That’s exactly how I like it. RNG in fights is bad. I like to get stuck, try repeatedly, and then never get stuck again once we’ve acquired the skill to overcome the challenge.

I’ll be out of town for the next raid night, but if I’m right about us not getting stuck again and they manage to get a full raid group, I’d suspect a Blackhorn kill next week. hopefully they can fill without me!