My search for tier 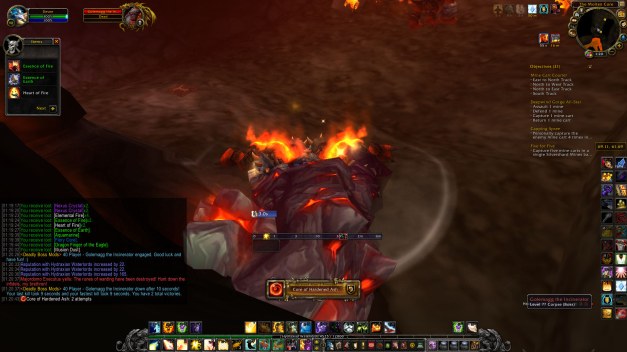 I’ve been running a lot of old raids recently in an effort to collect old tier gear. While i Was in Molten Core, I got this Core of Hardened Ash, which teaches the Ashstone Core. Pretty cool. Not done with this tier yet though.

I also obtained the Jewel of Maddening Whispers from AQ. It teaches a Mini Mindslayer. I particularly dislike gathering gear from the AQ raids. I don’t like having to deal with idols and scarabs. Ugh.

While I was in there, I did manage to hit exalted with the Brood of Nozdormu though. Yay! I’m almost done collecting gear from the AQ raids.

By this point, my bags were super full. I had to figure out a way to free up some bag space. One thing I did was spend my Spirits of Harmony on archaeology. I earned the What was Briefly Yours is Now Mine achievement for finding enough rares, but more importantly, I got this cute little Pterrordax Hatchling!