A few weeks ago, Zaghar, my guildmate, suggested we run Challenge Mode dungeons to get silvers for the mount before the first season of CMs ended with the completion of Mists of Pandaria. I’d been wanting to do CMs mostly for the, well, challenge of it. We’ve been running them when we had the chance. I wish we had started earlier because they’re a lot of fun. 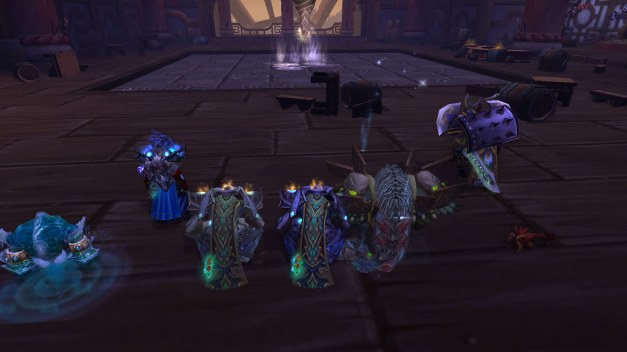 Is that a second Devee in the picture? No, it’s just Mooglegem.

I really enjoy how Challenge Mode dungeons greatly reduce the role of gear and tests group skill. In Warlords of Draenor, I think I’d like to try Challenge Mode dungeons earlier so I could aim for golds. However, I have to be honest that I’m not sure how much time I can truly devote to the game. I doubt I can seriously focus on CMs and raiding.

gem and I both chose Violet Pandaren Phoenixes as our rewards! Of course, soon we’ll have all of them when the patch lands.

I agree with him! The gear is worse than normal, but you need to have at least 10 people. Why would I run it then?

I disagree with many of Mr. Rossi’s points. I really need to make a post just on flex raids.

TyphoonAndrew loves the addition of flex raids but defends the importance of LFR.

Maybe NORMAL Raiding Should Die, Prinnie Powah, That Was an Accident!, 6/7/13.

Here’s an interesting idea. Prinnie Powah wonders if normal mode should be removed and replaced by flex raids.

The Red pox, the attack on Azeroth, Garrosh, and more.

Josh Mosqueira, the new game director of Diablo 3, wants items to feel meaningful and reduce “the impact of the Auction House.”

Mists of Pandaria, the next expansion, features a new continent, a new playable race – the Pandaren, a new class – monk, a pet battle system, revamped talents, a new battleground, more ways to earn VP, PVE scenarios, and challenge mode heroics. I have to say, I’m pretty happy with everything announced. There was nothing they did that disappointed me, and multiple announced things were pretty close to exactly what I wanted.

Going somewhere new is good. From the shots I saw, Pandaria’s asian-inspired look is gorgeous. And there’s a giant turtle that’s a zone. Come on. You sold me on the expansion right there, Blizzard! When our characters finally reach this new land, they’ll find a bunch of breweries! That’s another pro.

The Pandaren seem like a very interesting race to me. I like having another old, wise race in the game. Both factions could use a little more wisdom, and the Pandaren will hopefully bring that.

I want to play this right now. The lack of an auto-attack is interesting for a melee class and should make for fun mechanics. I’m particularly interested in healing with a monk. I haven’t had a good track record with playing alts, but I’d love to get a monk going.

I’ve been asking for this for a long time! Granted, I wasn’t asking for it in WoW, but what Pokemon fan hasn’t wanted a Pokemon MMO? We knew Nintendo wouldn’t do it, but here it is thanks to Blizzard. On the other hand, I’m not too keen on pets being tradeable. Some pets won’t be, and I’m hoping Blizzard will make it so that the only pets that can be traded are the ones that, in the current system, are able to be traded before being learned. I don’t want achievement-related pets to be tradeable.

Talent trees are a thing of the past. People might use the word “tree” in the future, but they’re not trees in 5.0. Every 15 levels you’ll be given a choice between three talents. From what I saw, every talent was fairly interesting and will actually make some differences. Obviously, reducing the number of talents increases the importance of each choice, and that’s pretty cool. Also, those polymorph talents. Mmmm.

I always appreciate choices as to what content I complete. I like to try to see everything, but I don’t want to grind the same content repeatedly. Right now, I don’t have a problem with VP because I’m actively raiding. We’re 6/7 weekly, and after I do Baradin Hold, I’m only one heroic’s worth of VP short (which I skip because I’ve done those to death and they’re boring). However, for a while I wasn’t part of the main raiding team, and I can tell you, doing those Zandalari heroics seven times each week is tough. Sometimes I feel like Blizzard forgets that part of some of the players’ lists of dailies are “go to work,” “perform chores at home,” and “run errands.” Getting Valor Points from more places mean we won’t get burned out as easily.

Battleground-like experiences that are PVE? I am so excited about this. Admittedly, they might not end up as fun as I hope; however, I love Battlegrounds and think this could provide an amazing and fresh way of playing the game.

This is actually something pretty similar to what I was asking for in a previous post. While not exactly the same, this can provide more fun from the same content. Already done grinding a heroic? See if you can complete it faster! Now in that same post, I called for the end of gear upgrades so that skill could play the important role. And in challenge mode, gear will scale down. Sweet.