I finally did it! As of 10/29/18, I never have to run the Headless Horseman again! I’m happy to finally obtain one was my most desired mounts in the game :)

Horseman rise…
Your time is nigh…
You felt death once…
Now, know demise!

It is over,
Your search is done.
Let fate choose now,
The righteous one.

The Headless Horseman is my favorite holiday event in any game. His poetry probably has a lot to do with it! 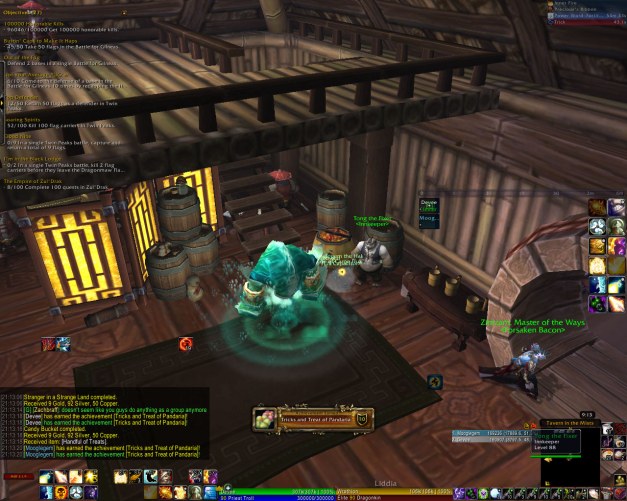 We waited until the 30th, but Mooglegem and I managed to earn Tricks and Treats of Pandaria in time! I’m not sure why we cared, honestly, but it’s fun. I really wanted (as usual) the Headless Horseman’s Mount, but it wasn’t to be for either of us this year.

Here we are in front of the Wickerman in the Ruins of Lordaeron. That’s Mooglegem in front and me off to the side. Yup, totally.

Last night was a particularly fun raid night! I don’t really know what does it always. I suppose it’s just the company primarily. I feel like naming people is kind of mean because it excludes others, but playing with Darth, Nate, and Lang is just so fun. Also, there was that Moogle girl. She finally made it to the first night! That means she went from 0/7 to 6/7!

Anyways, I was in a particular good raiding mood. Drinking that beer pre-raid might have helped! I also got to up top on the Beth’tilac fight, which was really exciting. We got in some Ragnaros attempts, but we didn’t make much progress. We can’t seem to get all the adds down. I can’t really say what’s going wrong. But Alysrazor gave me a delicious trinket! I was a happy priest.

In other news, after the raid I found that the Horde was holding Tol Barad! That’s rare on our server. I found a 25-man Baradin Hold and was the only priest in the entire raid! Of course, no PVE gear dropped for me, and only one piece of PVP gear. I didn’t win. I was so excited about being the only priest.

The best news though? Well, Hallow’s End started, of course! I love the entire holiday so much, but the Headless Horseman is just the best.

Horseman rise… Your time is nigh… You felt death once… Now, know demise!

It is over, your search is done. Let fate choose now, the righteous one.