5.2: Receiving the farm, conversing with the princes, gaining perspective, and assaulting the Isle of Thunder

Devee here! There’s a lot happening lately, mon, and I wish I could be more places at once. (Yes, I’m a troll who can speak correctly!) First, Nana Mudclaw asked Farmer Yoon to take over her spot in the Tiller’s Union. Not having time for both, Farmer Yoon gifted his farm to me! As I had just harvested enough pink turnips to make Jogu the Drunk his Mad Brewer’s Breakfast, I wondered what to plant next. However, I began to receive work orders! I wonder why organizations never did this before I owned the farm? Regardless, I accepted work orders from the Shado-pan and the August Celestials because I’m still trying to prove myself to them.

Having proved myself valorous, dominating in Krasarang Wilds, and victorious in the Silvershard Mines and Temple of Kotmogu to Wrathion the previous week, I followed his next direction by slaying High Marshal Twinbraid in Lion’s Landing. With the help of my fellow champions of Carpe Flux Capacitor, I managed to slay him. Meeting with Wrathion again, he reminded Mooglegem and me that he had previously asked us what the soul of the Horde was. He wondered if it was an instrument of vengeance, showing us Garrosh, a refuge for those who need shelter, showing us Thrall, or an alliance of convenience, showing us Sylvanas. Well, it appears he has his answer. He told Mooglegem and me that it was us! Maybe he meant all heroes, but I’d like to believe he meant us specifically. You can see Mooglegem above with visions of the Horde leaders (exclusing Ji Firepaw, Master of Houjin). Some other Horde hero decided to get in the picture with Mooglegem, but oh well. He then gave each of us what we’re calling an Eye of the Black Prince, which allows us to fashion an additional gem to our sha-touched weapons or Armaments of the Thunder King, whatever those are.

We went upstairs to talk with Wrathion and his guest, Prince Anduin Wrynn of Stormwind. I was excited to see Sunwalker Dezco as well. Wrathion seems to be putting together quite the exclusive group, as I’ve had the pleasure of meeting Prince Anduin and Sunwalker Dezco before and am quite fond of them. I’m happy to learn that Prince Anduin is recovering after the tragedy at the hands of Warchief Hellscream. Wrathion feels he might be too soft to lead the Alliance, but I disagree. Prince Anduin would do what needs to be done.

Of course, almost every time I meet with Wrathion, he seems to have a task for us. He wants Mooglegem and me to travel to the Isle of Thunder and prove ourselves by fighting the mogu, Zandalari, saurok, and Alliance there. I found it very disrespectful that Wrathion would ask me to slay Alliance in the company of Prince Anduin, but Prince Anduin held his tongue. Wrathion also asked us to collect tablets with the history of the mogu from the Throne of Thunder.

We then spoke with Lorewalker Cho who told us a story called A Little Patience. Apparently it happened when war  first broke in Krasarang Wilds. The Lorewalker told the story from the perspective of the Alliance, and it seemed so real that it felt like we were experiencing it. Varian and Tyrande disagreed about how to fight the Horde occupying the Temple of the Red Crane. Tyrande wanted to assault it directly, but Varian wanted to think more strategically and set traps, avoiding a direct fight. He sent heroes to help set up camps filled with traps. With that complete. he taunted the Horde forces, causing them to rush to fight. Most died in the traps. This allowed the heroes to kill the Kor’kron bodyguards and fight Commander Scargash, leader of the Horde forces at the Temple of the Red Crane. The Commander fell, and Varian proved to Tyrande that a little patience can indeed be valuable. It was interesting to hear things from the Alliance perspective, but I also found it odd that as a hero of the Horde, I didn’t know about our occupation of the Temple of the Red Crane. Sometimes I think that true Horde heroes have seen too much and that our Warchief likes to use lesser soldiers for tasks that heroes would question. 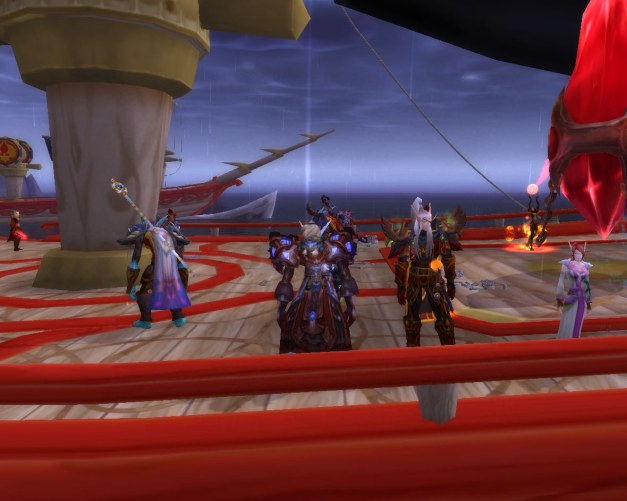 Mooglegem and I learned that the Shado-pan are leading an attack as the Shado-pan Assault on the mogu forces on the Isle of Thunder. Lor’themar is also on the Isle of Thunder leading the Sunreaver Onslaught. He informed me that Jaina Proudmoore and her forces, the Kirin Tor Offensive, are also on the island. Lor’themar said that Mooglegem and I “have served the Horde nobly across many campaigns,” and that he feels he “can take [us] into confidence.” I believe I can take you, readers, into confidence as well. Please don’t repeat this. He said, “Our Warchief’s campaign across Kalimdor and Pandaria is pulling the Horde apart at the seams. We are here to fight the Thunder King. Justice demands it, and Hellscream is too preoccupied at Domination Point to pay attention here. Bun, in defeating him, we must seek out the source of his great power. We must claim it for ourselves, as leverage against our ‘Warchief.’ In the event of an uprising, we must be prepared.” He took a break from his speech here to shoot down an approaching flying dinosaur of some sort. It was an impressive show of archery skills considering he has only one eye.

We ventured to the island itself and found three bases of sorts. There are a multitude of dangerous enemies here – the mogu, the Zandalari, the saurok, and the Alliance. The Alliance seems to be the most dangerous of the four. It’s too bad we can’t work together. There’s much more work to be done. I want to continue securing the Isle of Thunder, assault the Throne of Thunder, and explore the mysterious Isle of Giants. There’s only so much two heroes like Mooglegem and me can do, but I look forward to a future in which we can eliminate the threats to our life and happiness. I just worry that one of those threats is our own Warchief.