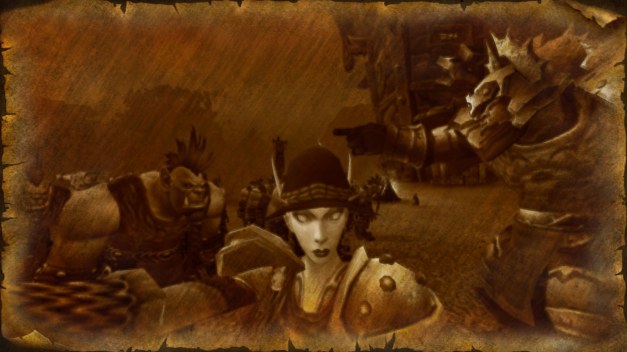 I recently finished Stonetalon Mountains on my paladin, Illuminnae. This post contains spoilers for a really good zone, so keep it in mind if you want to keep reading.

In the above selfie (sorry, I couldn’t help myself), Overlord Krom’gar is yelling at his troops. He’s a pretty brutal commander and will stop at nothing to drive the Alliance from Stonetalon Mountains. Throughout the quest chain in the zone, he’s planning on dropping a bomb on the Alliance forces.

General Grebo is his second in command, stationed at Cliffwalker Post. He believes that Thal’darah Grove is home to a powerful Night Elf weapon and wants to use the bomb on it. High Chieftain Cliffwalker knows that there’s no such weapon there. He knows it’s been a meeting place for druids, both Alliance and Horde. After asking to be allowed to present proof, he sends his son there to obtain said proof. I’m not sure what this proof was actually.

High Chieftain Cliffwalker’s wife, Masha, is quite distraught. I like seeing this level of emotion in the game. People die, and it’s tragic when they do.

They urge you to return to Krom’gar to let him know that they only acted in self defense. Krom’gar basically ignores all that information, considering the High Chieftain to be traitorous. He and his soldiers set fire to Cliffwalker post and murder Masha. Finally he forces High Chieftain Cliffwalker to watch as he drops the bomb on Thal’darah Grove.

Moments after the bomb is detonated, a portal from Orgrimmar opens. Garrosh steps through to confront Overlord Krom’gar while Garrosh’s guards slay Krom’gar’s men.

Warchief Hellscream demands to know what Overlord Krom’gar has done. Krom’gar claims to have been following orders. Hellscream, furious, asks if his command was to murder innocents. Garrosh says he sent Krom’gar into Stonetalon Mountains to secure the land for the Horde with his army, but instead, Krom’gar “laid waste to the land. Murdered innocents. Children even…” He goes on to quote Saurfang, saying, “Honor… no matter how dire the battle… never forsake it.” He relieves Overlord Krom’gar of duty, lifting him by the throat and dropping over the cliff of Cliffwalker Post.

When he turns angrily toward the player’s character, High Chieftain Cliffwalker stops him, explaining that he or she was the person who found out about the corruption and tried to stop Krom’gar. He asks for mercy. Garrosh notes that after his wife and child were murdered, kin were killed, and home burned to the ground, he still requests mercy, saying “Mercy… Chieftain, on this day I learn from you.”

What a fantastic finale to the zone even though I roughly knew what was coming. This builds on the original Garrosh we saw earlier, one who was growing and learning. Clearly, Blizzard decided to take Garrosh’s character in another direction. It seems ironic that the very thing Garrosh was so mad about is exactly what he does later when he drops a manabomb on Theramore.

The first time I tried to record the finale I made a bit of a mistake. It’s short, so check it out to see my blooper.

Here’s the actual finale, which is about six minutes long. 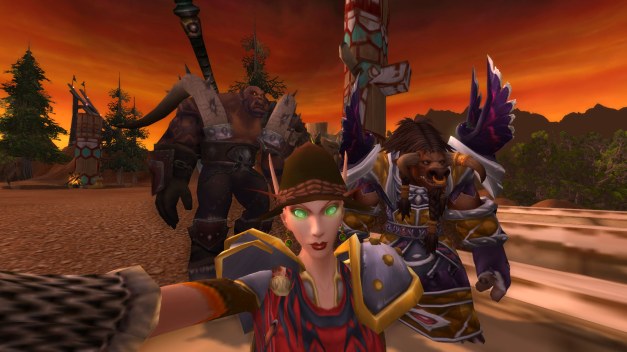 After all that death and drama, it seemed like the most inappropriate time for one more selfie, this time with High Chieftain Cliffwalker and Warchief Garrosh Hellscream.