The Darkspear Rebellion explained and considered

The Darkspear Rebellion was very exciting. Yes, it was pretty short, but I like that. You can see all the content in the day, but you can grind some more if you’d like. You can watch me experience it in the video below. Of course, the video and this post contain huge spoilers. I’ve also cut a lot of the repetition from the video. Below I first explain the lore and story involved before giving my opinion and feedback. Click here to jump straight to my feedback.

After witnessing events elsewhere on Azeroth with Lorewalker Cho and his dream brew, I was sent to Sen’jin Village. Vol’jin is there planning a rebellion against the Warchief, Garrosh Hellscream. With him are Thrall and Chen Stormstout. You’re tasked with collecting some supplies from the new Kor’kron camps in the Northern Barrens.

After completing this task, I returned to talk with Vol’jin, Thrall, and Chen. The Warchief, or at least his Kor’kron, figured out what was happening and led an attack on Sen’jin Village. Unfortunately for them, we were able to defeat them. As they fled, Vol’jin suggested we let them run because they’d be executed by Hellscream for doing so.

Vol’jin’s next move was to plan on attack on Razor Hill, using it as a staging ground before laying siege to Orgrimmar. Thrall parted ways with the rest of the rebellion at this point, believing that some of his previous advisers, such as Eitrigg and Saurfang, must not support Hellscream. Vol’jin told him that he’d be killed upon setting foot in Orgrimmar, but Thrall felt he had to try anyways. He told Vol’jin to watch over Aggra and his boy if he’s killed. gem watches from her direhorn, propped up cutely on the stairs. 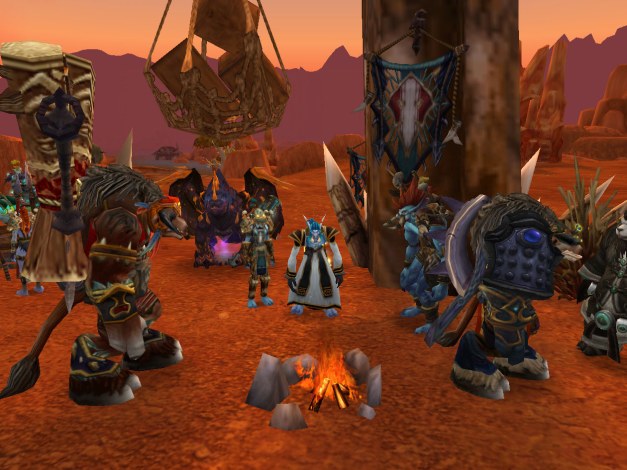 After taking Razor Hill, the rebellion sets up camp at a watchtower just north of the city. Baine Bloodhoof arrives, happy to see Vol’jin alive. He offers to join the rebellion. I was tasked with two new objectives – to steal many more supplies from the Kor’kron and to speak with the Old Seer currently climbing Mount Neverest in the footsteps of the last emperor.

First, I went to the Northern Barrens to collect materials from the Kor’kron and to kill the Kor’kron commanders. Once that was done, I headed to Kun’Lai Summit. 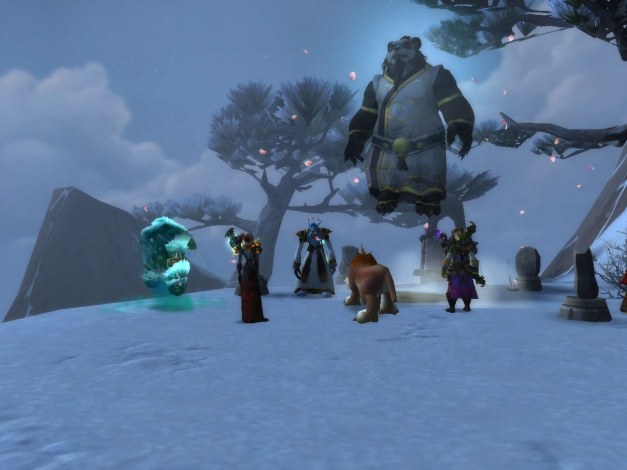 I helped the Old Seer, Seer Hao Pham Roo, climb the mountain, during which he explained how when he was young he would have had trouble performing the climb. For example, he says, “My, you are strong! When I was young, I might have doubted that we could do this. But now, I have no doubts at all.” In fact, he mentions overcoming anger, violence, doubt, despair, hate, and fear.

Upon completing all the tasks of the Darkspear Rebellion, I became Darkspear Revolutionary Devee. (If I was a member of the Alliance, I would gained “Hordebreaker!”)

My opinion and reaction

I’m incredibly happy with the Battlefield Barrens event. The lore was fantastic, and experiencing it was a ton of fun. The only grind is collecting supplies for the weekly, but that really only took an hour or so. Of course, if I choose not to do it again, it wouldn’t even be that big of a deal. The conflict rose at a great pacing as well. First, we attacked the Kor’kron haphazardly. Next, they attacked Sen’jin Village, and we defended. Finally, we led a full assault with a marching army upon Razor Hill. Very cool!

All three leaders of the primary Western Horde were there – Vol’jin, Thrall, and Baine. They even mentioned that Lor’themar agreed with the rebellion but was still busy and that Sylvanas agreed but was too far away. It was nice to see Baine show up despite there still being tauren within Orgrimmar. The dialogue between Thrall and Vol’jin was also touching. I know I’m a sap for lore and story, but I really enjoyed it. I hope Blizzard wasn’t foreshadowing Thrall’s death, but in all honesty, I was expecting his death at the end of Cataclysm already. Many people love Thrall, and many people are sick of seeing him. Killing him could be a fitting solution. The people who are sick of him won’t need to see him anymore. The people who love him will have him go out at a high point in his life and can remember him as a great hero.

The quest with the Old Seer was simply amazing. I didn’t even realize he was talking about defeating the sha as we climbed until I went back to watch my own video. And when he transformed into the Emperor, I was at a loss of words. I know that sounds silly, but I have a low tolerance for “awesome,” and this was super awesome. A lot of people were expecting a final Sha of Pride, but it’s nice to see it confirmed. And it’s definitely true that Garrosh has been acting more prideful and much less honorable than previously. When did the mists part, anyways? Could the Sha of Pride have left Pandaria, parting the mists, near the end of Cataclysm – right around the time Garrosh Hellscream began planning the destruction of Theramore? It could explain his change of behavior!

I can’t wait to see the Siege of Orgrimmar!