My second week in Heroes of the Storm 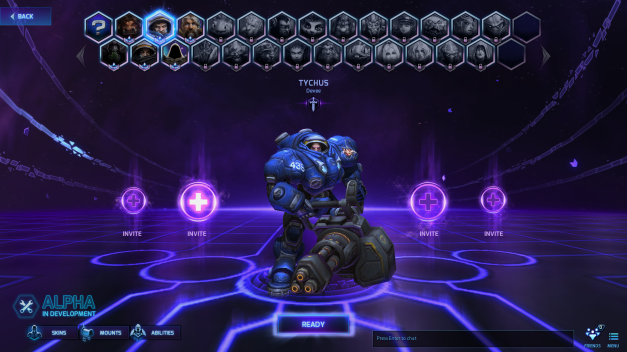 Five new heroes to play this week (because one of the six was Raynor, who is always free).

First I played Tychus, an assassin. As someone who doesn’t play Starcraft, I’m pretty sure Tychus is just Raynor II. Okay, he doesn’t really play the same in Heroes of the Storm, but he  certainly looks the same. He has to rev up his gun, making him a fairly slow hero. I wasn’t too fond of him.

The Elite Tauren Chieftain, the warrior, is an awesome hero. Just look at him. I’m pretty glad Blizzard chose to include him, because it’s definitely a fun idea. As for playing him, I wasn’t great at first. He has some good crowd control abilities, but he also appears to be tankier than he really is. I was pretty bad at him when I selected him, but I got better at him through Abathur (more on that later).

I was excited to play Tyrael, a warrior. He’s good at protecting other heroes, which I suppose makes sense given his role in the Diablo franchise. One of his abilities has him throw his sword, dealing damage where it lands. Tyrael can then teleport to the store. He wasn’t exactly my cup of tea, but I liked him nonetheless.

I liked Uther, a support hero, much more than I expected. Once again I find myself playing the healer. It’s really my role, isn’t it? He heals allies, has an ability that damages enemies and heals allies, stuns, and more. He might be a hero I need to purchase in the future.

Abathur, a specialist, is the strangest hero I’ve played. He can send Locust down lanes and place Toxic Nests that explode when enemies contact them and help reveal the map. However, what makes him interesting is that he can place a symbiote in other heroes. Once this is done, the camera follows that hero, and you’re given new abilities. From the hero with the symbiote, you can stab a target with a spike, shoot spikes out around the hero, or shield the hero. Most interestingly of all, Abathur is able to create a duplicate of an allied hero temporarily and controls it. Of course, that means that to be good at Abathur, you have to be good at every hero, but it’s really quite fun. I did really well with him (despite not being great at every hero), and I plan on practicing with him more.