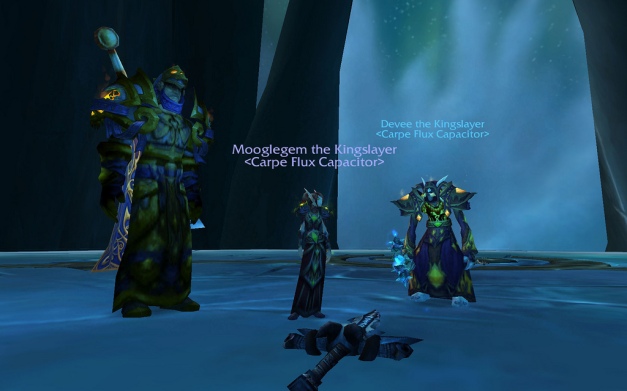 The Death of Arthas

I think I’ll need to revisit my favorite WoW memories in the future. My favorite memory is most likely all the fun I had PVPing in general with gem as we leveled. However, my favorite memory of a single, defined moment was our final kill in Icecrown Citadel.

It took a long time for us to kill the Lich King. We struggled for what felt like an eternity. I was worried about the guild getting a kill before we fell apart for the rest of the expansion. I remember eventually having no problem with Necrotic Plague duty. I remember battling Infest. Most of all, I remember the thrill of mastering Defile. One day, it finally happened. We slew the Lich King.

I had an idea of what happened. I’m going to spoil the ending here, but I assume everyone already knows. I knew that the fight ended at 10%, but I didn’t know what happened. The discovery that Arthas had planned for us to reach him made sense yet was exciting. It was so thrilling seeing Tirion burst from his ice tomb and strike at Arthas. King Terenas was a surprise, and his mass resurrection was very cool. And then that cutscene. I accidentally found out about Bolvar, yet the cutscene was still so great. Do you know how hard it is to avoid watching a major lore cutscene ahead of time?

After the kill, I started to tear up. Luckily, Andy knocked on my door so I stopped myself.

To add to the greatness of the fight, I won Halion, Staff of Forgotten Love.

That was the best fight!