Controlling the Orb of Control

I got to use the Orb of Control tonight! I don’t understand why I made Horridon bash the gate though. He’s so cute. I would have made him come hang out with me. We’d be good buddies.

Counseled the Council of Elders

We had thirteen failed attempts before our successful kill; the video shows the last few seconds of each failure before the full success. Now it’s on to Tortos!

Horridon THE CUTEST BOSS EVER down 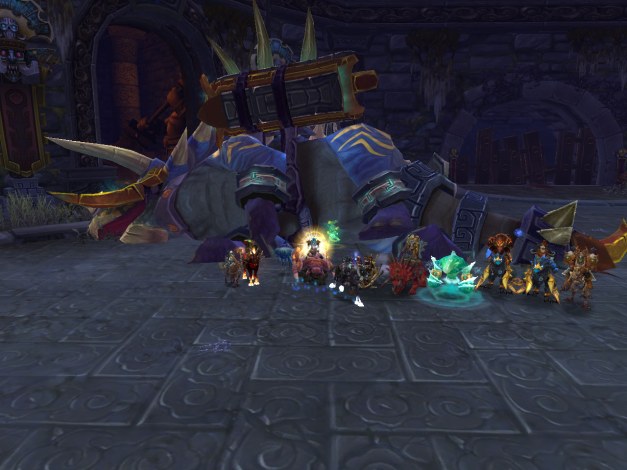 This week we killed Horridon for the first time!

I think I’d look good riding on a Horridon. Sadly, the mount didn’t drop. It would pretty nice to have one day.

It only took us 13 wipes to down Horridon for the first time! That seems like a lot, but I guess it wasn’t so bad. I think it was only two nights. We put some attempts into the Council of Elders as well but didn’t get far. Maybe we’ll progress more next week!

I Have Discovered the Source of Forum Complaining in Mists!, Balkoth, Balkoth’s Word, 4/13/13.

I didn’t even realize Horridon dropped a mount. It’s so cute! I want one!

Atal Zanza Aka on Argent Dawn (EU) is a roleplaying guild of trolls loyal to the Zandalari based in Zul’Gurub. Very cool.

What do we know about Uldaman, and why should we go back?

Know Your Lore, Tinfoil Hat Edition: What was the purpose of Uldaman?, Matthew Rossi, WoW Insider, 4/10/13.

Rossi guesses as to the purpose of Uldaman. I wonder if Blizzard actually thought that far ahead.

Jarre of Rank4HealingTouch provides some math to determine what’s faster – mounting or running.

Here’s an interesting change. You’ll now have to pick your role when queuing for a battleground. From now on, the difference between the two teams’ number of healers can be no more than one. I wonder if I can just queue as DPS and then heal.

If you’re curious about what’s been happening in TOR, Lefebvre can bring you up to speed.

Every once in a while I can’t resist a photo op, even if there isn’t much to say about it!

Horridon wants to say “hello.” Isn’t he cute? I want stuffed animal versions of pretty much every dinosaur introduced in 5.2.