Three holidays at the same time might have been a lot of work, but at least I got a couple mounts out of it! First, we got out Darkmoon Dancing Bears. It makes me sad thinking about the painful way bears are treated in captivity (especially how they’re taught to “dance”). Still, I like collecting bears in WoW because bears are cute, okay? 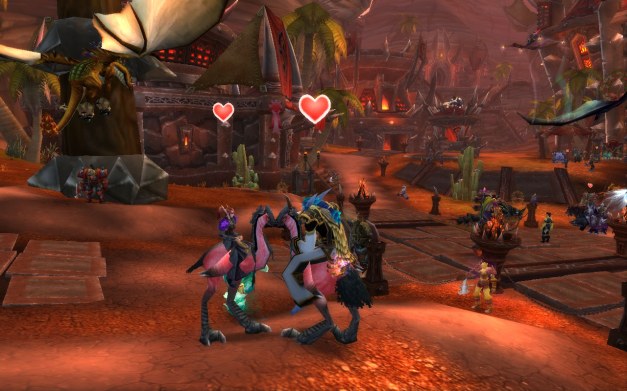 We also snagged the odd Swift Lovebirds. In this picture, our Lovebirds are kissing! Or it’s possible they’re just being kind of ugly together.

(Horde) Love is in the Air

I actually made these totally sweet confections for my guild’s Secret Santa, but I never got around to posting them.

About a year ago, Harley sent me pictures of these beautiful Horde cookies from C is for Cupcakes with one sentence: “but how do we make them?!” They’re pretty fancy looking – with fondant maybe? …probably? I haven’t tried working with fondant yet. It sounds like a lot of work. Maybe I’ll make it a goal to try working with fondant by the end of this year. Hm…

I was pretty intrigued by the idea of making Horde cookies for months – I didn’t want to put a lot of time into planning them, but I really wanted to make them. Eventually, I got off my lazy butt and started researching custom cookie cutters. I severely mangled a few cookie cutters before I ended up with this thing:

Anyway, I hope you have a great day!

Love is in the Air

Happy Love is in the Air! And happy Valentine’s Day for those of you keeping track in the real world. Mooglegem decided to put down her Romantic Picnic Basket on the deck of the Skyfire before we chased Deathwing this week. Quite a few people decided to join!

I hope everyone’s spending the day with a loved one!

This weekend I did LFR as I always do. It was terrible. I enjoyed having the opportunity to see Dragon Soul at first, but I stopped having fun in LFR a while ago.

The trash is incredibly boring. The bosses are not challenging. We only wipe if a large portion of the group has no idea what they’re doing. There’s very little I need (two rings). The upgrades I do need aren’t even that helpful. (And of course, my computer can’t handle 25s very well.)

It seems to me that there’s two reasons to do anything in World of Warcraft. The biggest reason to do anything is that you enjoy it. The secondary reason is the reason on which Blizzard depends to keep us all paying; we do things we don’t enjoy because it will help us do the things we do enjoy. This is called “grinding.”

I like raiding. I like the increasing challenge of pushing ahead, and I like experiencing new content for the design, story, and lore. Doing LFR was great because it was a way to see Dragon Soul. However, there’s no challenge in it. Yes, there are still wipes, but they’re never because of me. The only reason to do LFR is for equipment upgrades and Valor Points. But upgrades are only important because they help you to do better. Grinding for upgrades falls into the second category of why we play World of Warcraft. However, I’m not raiding normal Dragon Soul at all. I’m not in a raid group currently, and PuGs all seem to want the full achievement. I suppose I could try talking a PuG into taking me, but it just doesn’t seem worth the trouble. The most Dragon Soul I’m seeing is LFR, and I’m obviously able to complete that easily every week. If that’s the case, why try for upgrades? Upgrades aren’t going to help me in normal mode because I’m not doing normal mode, and they’re not going to help me in LFR because it’s already not a problem.

Why even do LFR then? Well, that’s exactly what I’m wondering. I’m going to try to stop doing things that I don’t enjoy. Some small grinds might be worth it. For example, I’ll continue doing the Love is in the Air holiday boss for the chance at the mount. However, I’m not going to make a big deal about working LFR and other heroics into my week. I don’t even need Valor Points anymore, so is it really worth stressing over LFR for two rings that I don’t even really need?

There’s a part of me that wants to be as best equipped as possible, but is being “BiS LFR” really worth saying?