Recently I went back to get my DK class mount from Legion. I had finished the order hall campaign and figured it couldn’t be too much work to get the mount. At one time you had to finish the Legionfall campaign, but it seems that’s no longer the case. I doubt it took me longer than an hour or two to get the mount. Spoilers for the quest series follow.

The quests involve finding the remains for a powerful red dragon and raising it in undeath. One quest has you enter the Ruby Sanctum. Originally, there was a feat of strength you could earn for slaying all the red dragons in the sanctum, but Blizzard removed it because they decided it wasn’t fair to give a reward like that for something you could miss. Since it was removed by the time I tried to do the quest, I took the opposite approach; I got in and out without killing anything.

Here’s a video I edited together of the lore parts of the quest series. Starting at 9:26 you can see the three forms of the mount. I mostly play unholy, but I think it’s the worst variation. I like the frost one! 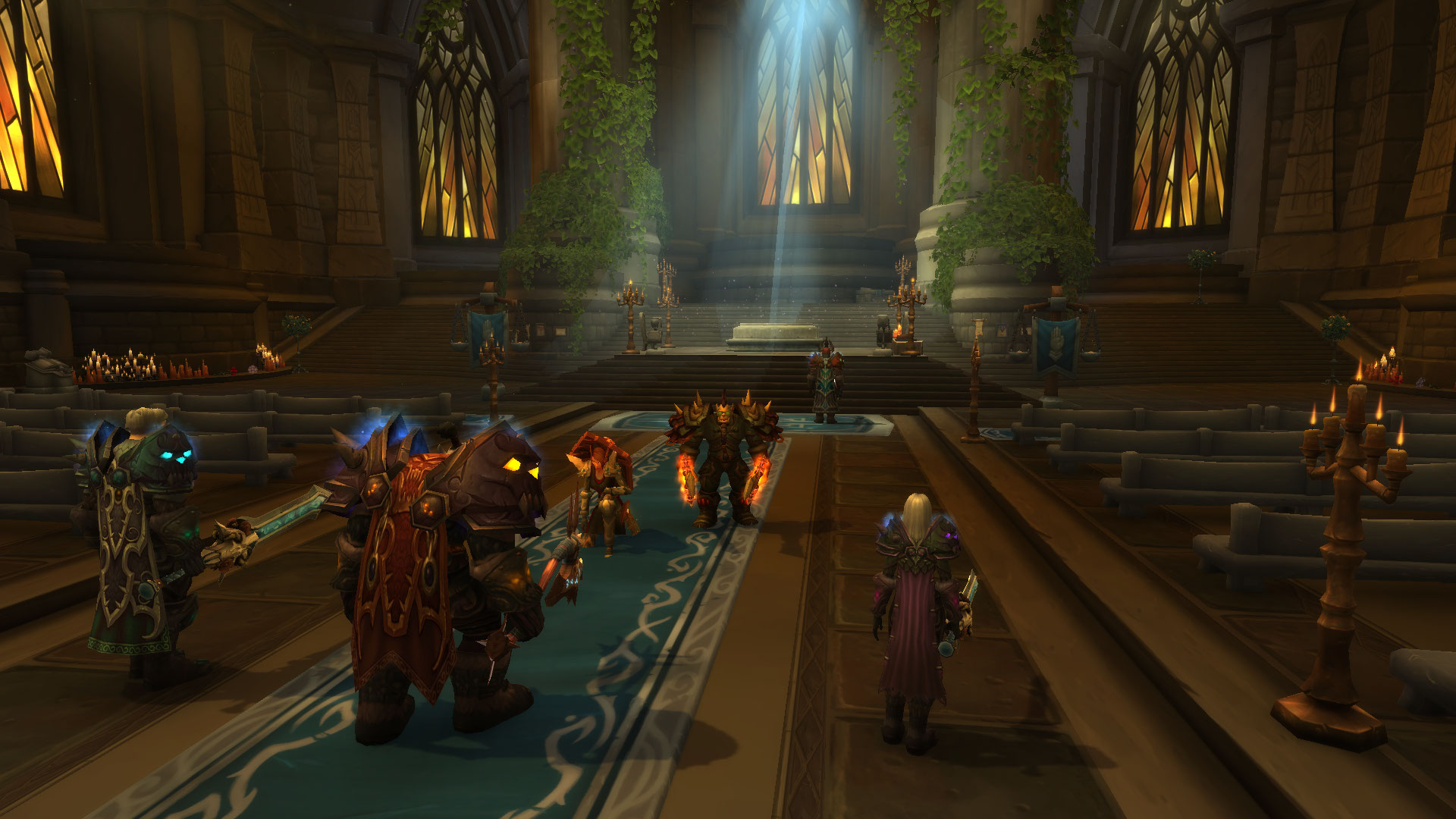 I finished the death knight campaign from Legion last month, and it was as excellent as I heard. I know this is content from last expansion, but I should note that this post will have spoilers.

Over the course of the campaign, the Knights of the Ebon Blade work with Bolvar, the new Lich King. In exchange for the Lich King directing the death knights to two artifacts, helping with the third (reforging the shards of Frostmourne into the twin Blades of the Fallen Prince), and keeping the Scourge contained, the death knights agree to act as Bolvar’s vengeance against the Burning Legion. Bolvar asks the Deathlord, the new leader of the Ebon Blade and the player character, to raise new Four Horseman.

The first, Nazgrim, is my favorite. I loved Nazgrim. Seeing him develop from a Sergeant in Wrath to a Legionnaire in Cataclysm to a General that we defeated in Mists was a great experience that made the world feel much more alive. Plus, he’s responsible for “Thrall’s balls!” And now he’s one of the Four Horsemen.

The second is Thoras Trollbane, who was a king of Stromgarde. Honestly, I don’t really care about this much.

The third is Sally Whitemane, who was High Inquisitor of the Scarlet Crusade. This is another cool callback.

Finally, Bolvar sends the Knights of the Ebon Blade to Light’s Hope Chapel to raise Tirion Fordring as the leader of the Four Horseman.

In the finale of the campaign, the death knights invade the Sanctum of Light, a secret underground order hall beneath Light’s Hope Chapel. It serves as the paladin order hall for the Knights of the Silver Hand, although the scenario is instanced so you don’t see players. After defeating Lady Liadrin, the Light itself stops you from resurrecting Tirion. Highlord Darion Morgraine uses a deathgate to escape but is killed in the process. Back in Acherus: The Ebon Hold, you resurrect Morgraine as the fourth horseman.

This was a fantastic finale to the campaign, and I loved experiencing the darkness after playing through the priest campaign. The priest campaign was really boring, and it never really felt like we did anything cool. In fact, the end of the priest campaign had the order hall, Netherlight Temple, get attacked by a dreadlord and the Knights of the Silver Hand come to save them. I like kicking some butt as a death knight over getting saved by the paladins. Although now that I think about it, I guess the paladins were the ones who really won!

Today’s the last day of Warlords of Draenor, although with the content Blizzard’s provided in the pre-patch, it feels like we’re already in Legion. I enjoyed Warlords, and now the pre-expansion content has me excited for Legion.

The Broken Shore scenario and accompanying cinematics were awesome content. If this is what’s in store for us now, what will the expansion bring? Quests given to us weekly to slowly give us more content leading into Legion was a great idea as well. It reminds me of the Garrison Campaign in some ways. I wish more content was released like this.

I took care of everything I wanted. I got all the pamphlets from the Doomsayers, and I terrorized Orgrimmar as a Dreadlord. I managed to unlock every reward from the invasions – all the weapons, all the armor, and the pet. Illuminnae, my paladin, doesn’t even seem to care about the invasion itself. Here she herbalizes while demons attack in the background. And I managed to hit 100 with her, which is only my second character to ever reach a level cap. I did some LFR on her as well to experience more max level content.

With the awesome XP from the invasions, I couldn’t stop at Illuminnae. Logrus, my Death Knight, also hit 100 with the invasions, ran some LFR, and even got the Pocket Fel Spreader on his first Dread Infiltrator kill. 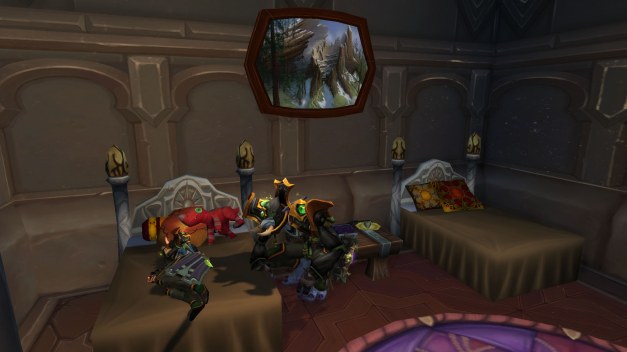 I’ll leave you with a stuffed dinosaur I found in Dalaran!

What If Paladins Had Stayed Alliance-Only?, Rohan, Blessing of Kings, 8/19/13.

I love this. The Alliance story was the story of their paladins. What if paladins had stayed Alliance-only and shaman had stayed Horde-only? What if Death Knights had been given to the Horde, and monks to the Alliance? It’s an interesting article.

Why do the orcs want to kill Garrosh? Why do players hate Garrosh but like Sylvanas? Rohan thinks that in lore, the orcs in general aren’t turning on Garrosh. As players, we like Sylvanas because she’s “all cool and calculating” while Garrosh “is a thug.” Players are more likely to identify with Sylvanas.

Be careful with whom you /flirt.

Chilton’s discussion of the Timeless Isle and Blizzard’s pull away from dailies are particularly interesting.

I’m glad we have a little more time to Ahead of the Curve: Lei Shen for raid team members who missed our kill.

Speculation on what The Dark Below could bring.

Reaper of Souls might have been unveiled, but I still think these speculation articles are great.

Rossi explains how awesome it would be if we had an expansion focused on Gelbin Mekkatorque embracing technology and shunning the divine.

Even if you haven’t been reading this story, this is an interesting article about “assumed RP.” I didn’t really know anything about this, but it was a fascinating read.

If we’re going to continue to get new abilities every expansion, an ability purge seems important to me.

This epic crafted Frostsaber has ridden off with our hearts, Elizabeth Harper, WoW Insider, 8/15/13.

This is so cute!

No surprise here. Changes to the core mechanics will happen even if you don’t purchase Reaper of Souls.

A retrospective on the first legendary quest line, the series to obtain Thunderfury, Blessed Blade of the Windseeker.

What will happen to the Horde after the Siege of Orgimmar?