Totally not the cow level

There were rumors of a bovine invasion this weekend, but “Management” was quick to give notice to the Citizens of Sanctuary that the rumors were unfounded.

…while the idea of some sort of “cowpocalypse” (as one terrified farmer has taken to calling this) is udderly ridiculous, it is worth noting that one can never be too careful. And so, after consulting with our local Horadrim chapter, we have elected to issue an advisory… it is also recommended that you avoid entering any strange portals that may or may not lead to alternate planes of existence. This activity cud be potentially hazardous to your health and, in the opinion of this humble civil servant, is a veally bad idea in general.”

After about an hour of searching, I found a Herald to the Queen. Moogle joined me, and we explored the portal together.

Leads to a place that does not exist. The Burning Hells are not responsible for events that transpire there. If you claim to have been to this place, you will be called a liar. Void where prohibited.

We defeated The Cow Queen, met the Ghost of the Cow King, and killed hordes of hellbent bovine.

…except that never happened because the place doesn’t exist, of course.

Also the music was excellent. 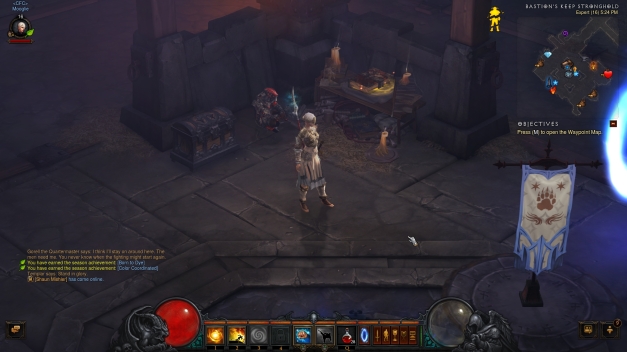 Shhh, no one tell Mooglegem that I stole her name. This is Mooglie, my monk for Diablo 3 season 2. I’m still fairly low level, but she’s been fun so far.

This is the really satisfying part of the upgrade that no one ever mentions.

In all honesty, I do enjoy the Blizzard mousepads. When I get a new Blizzard game, I always enjoy switching mousepads. Sometimes I might find myself thinking, “wait, what was the latest release?” and then I can just look under my mouse. Okay, that never happens.

As for Warlords of Draenor, I don’t want to dwell too much on it here. I’ll probably talk about it more over the weekend. However, I’ll briefly discuss my initial thoughts. Despite server troubles, I’ve really enjoyed it. The introduction experience in Tanaan Jungle is sweet, and I love the cinematic way of introducing the warlords (or buildings in the garrison). I love feeling powerful and being recognized as a hero. The garrison is super fun. I’m very happy.

Hit 70 on my crusader 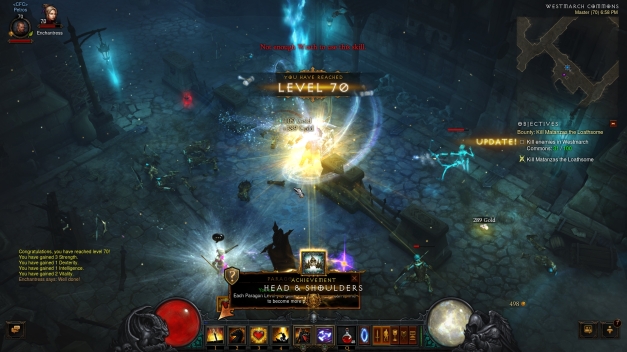 On the launch day of Warlords of Draenor, I thought I’d change it up and talk about Diablo. I recently hit 70 on my crusader – the first time I’ve hit the level cap in Diablo III. I never actually posted about this character at all. After gem and I finished Reaper of Souls near the end of September, I created a seasonal crusader and leveled only through Adventure Mode. The game is much more fun and quick in Adventure Mode, so I was very happy with that. I enjoyed the crusader as well. He has a strong and steady feel like he could walk through any barrier. I particularly like using flails, but I use whatever’s best.

Now that I’m at the level cap, I could check out endgame. I’m playing on Master currently because I can’t quite handle Torment. As such, no Greater Rifts for me yet, but I did try my hand at Nephalem Rifts. They’re… not that fun. In addition, combining gems has always been one of the most satisfying parts of the game for me, but now I can’t afford to combine all my gems. Boo! I intend to play some more, pushing into Torment and trying Greater Rifts, but I don’t know if it’ll happen. After the first night of being max level, my drive to play fell greatly. However, I know I’ll be back in season two to try a new class! 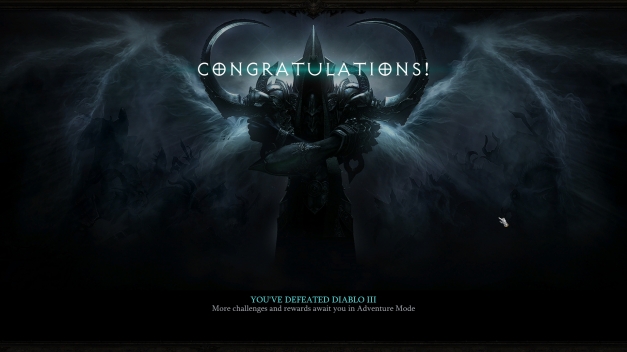 gem and I recently beat Reaper of Souls! I know it’s been out for a long time now, but we stopped playing for a while. 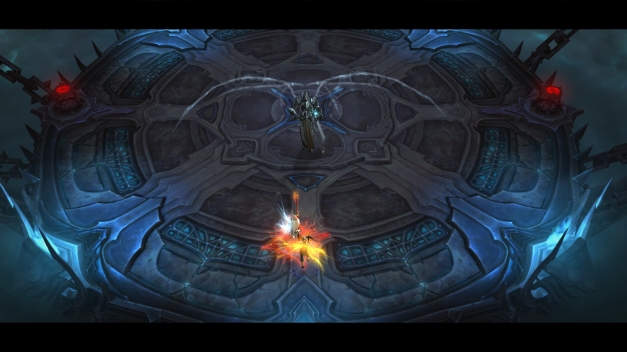 When we started the game that evening, we were on a quest to find Malthael. It was pretty obvious that we were near the end of the game, but I didn’t realize just how close we were. 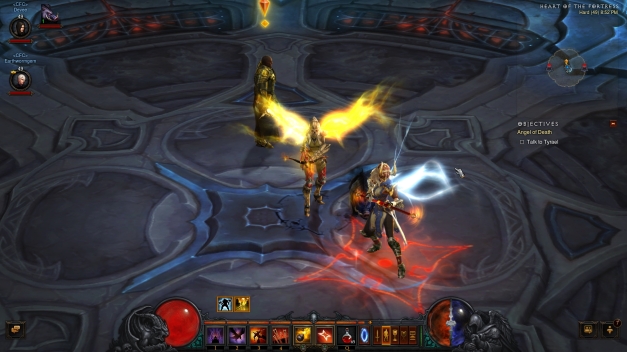 Honestly, it felt a little anticlimactic. I wish there were more mechanics to the final fight. Like a lot of Diablo III, it just seemed a bit too easy. Yes, I know you can make it more difficult, but really, we should struggle a little. Also, I think they should have drawn out Malthael longer. If they’re going to introduce a large, new story element – an angel turning against humanity – they should let that simmer for a while. 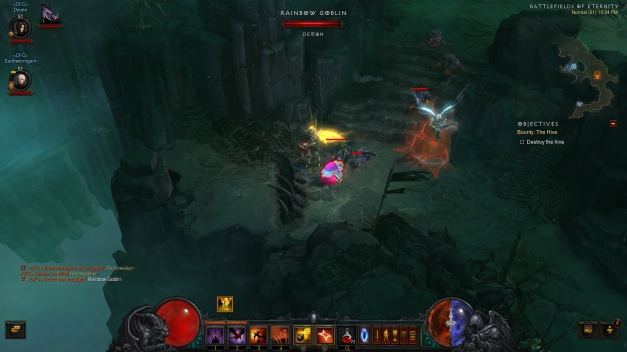 After killing Malthael, we decided to step into Adventure Mode finally. As we collected our bounties, we came across a Rainbow Goblin! 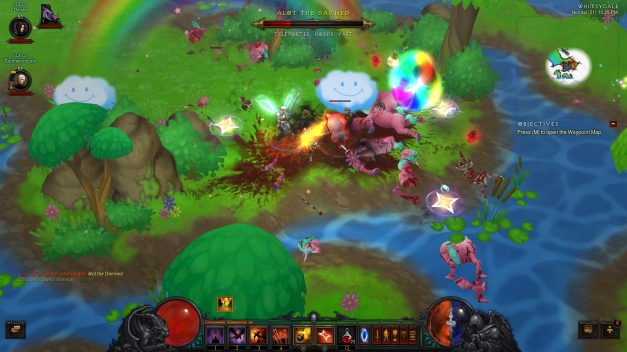 I knew what was coming, but Whimsydale came as a huge surprise to gem! I’m glad she got to experience it like that, because she seemed pretty excited. 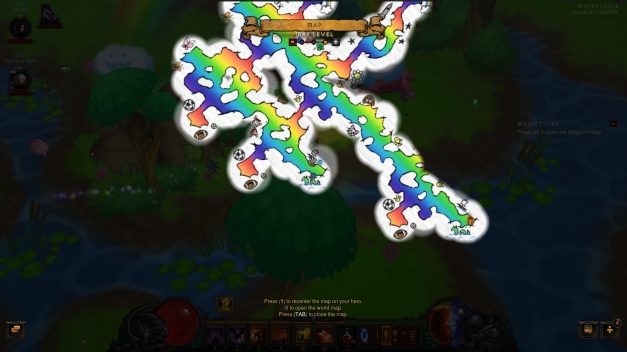 Look how cute that map is!

By the end of the night, my Demon Hunter, Dara, was in the low fifties. I’m not sure what’s next, but I’ll probably be playing a bit more D3 now. 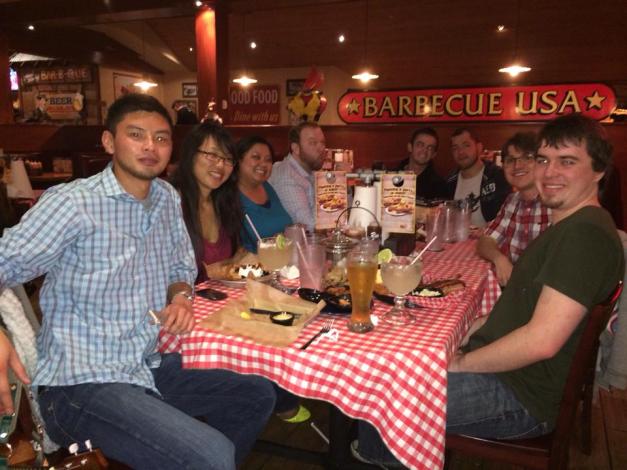 BlizzCon was this weekend, and I found the announcements pretty exciting. Despite living just twenty to thirty minutes from the convention center, I didn’t go. I think it feels less special as a convention because it’s so close, but I do watch the stream. I’ll be posting about some of the announcements and my feelings about them later. I have something more important to mention first!

What would World of Warcraft be without people with whom to play? Some of my guildies came down, and got to hang out this weekend. I’m second from the right, in the red shirt. I stole the pic from my guild leader, so hopefully she doesn’t mind. I went to dinner with three out-of-towners and Mooglegem on Friday night, and Saturday night the group of us above went to dinner. That includes four people I met (in person) this weekend, which was great.

In the photo, you might notice a cookie jar between a glass of water and a beer. Moogle baked cookies and brought them with her in that jar. While we in line at a restaurant, she handed them out to us. A girl behind us got excited, asking where we got the cookies. Moogle explained that she baked them and brought them with her. She seemed sad, and Moogle offered her a cookie. She got really excited, accepted, tried it, and then told Moogle how good it was! Later, when we were seated, Moogle offered cookies to our waiter and waitress. The waiter took one fairly early and thought it was great. It was later in the meal when the waitress accepted, and she also told Moogle how good she thought it was. A few minutes later, a different waitress came over to us, telling us that she didn’t know who baked the cookies but that her coworker shared a piece with her and she thought they were amazing. Moogle gave one to her too. Everyone loves cookies!

As for the content from BlizzCon itself, I was pretty impressed. I think Warlords of Draenor sounds very exciting and the changes are, generally, good ones. I’m also pleased with what I saw of Reaper of Souls. I’ve never played a MOBA, but I’m optimistic about Heroes of the Storm (and the trailer was fantastic). I’d actually not played Hearthstone in a while, but the convention made me excited to play once more. Adventures sound particularly cool! And I guess StarCraft was there. I don’t play it. I’ll post more in-depth about the announcements in the future!

Suggested Reading: Of turning points, the Siege of Orgrimmar, Varian Wrynn, Reaper of Souls’ loot, and that’s it.

The war against Hellscream is coming. The die has been cast. This is a fantastic piece of the importance of this event. It could be a big turning point for the Alliance as well as the Horde.

Good information if you’re anxious to jump into Siege.

A look back at the lack of Varian in vanilla. I really wonder what stories were dropped by Blizzard.