I found this video that I never uploaded. Apparently, Carpe Flux Capacitor drafts players when we need to split the raid group. It was a good time.

The Paragons put down

We awakened the Paragons of the Klaxxi, so it’s only fitting that we put them down too. Tuesday we fought the Paragons for the first time. On our eighth attempt we managed to kill them.

No loot for me, but as usual, I prefer progression over loot. We’ll be seeing Garrosh on Thursday hopefully. I might go shadow for the fight, which could be fun.

Our guild’s kill announcement can be found here. 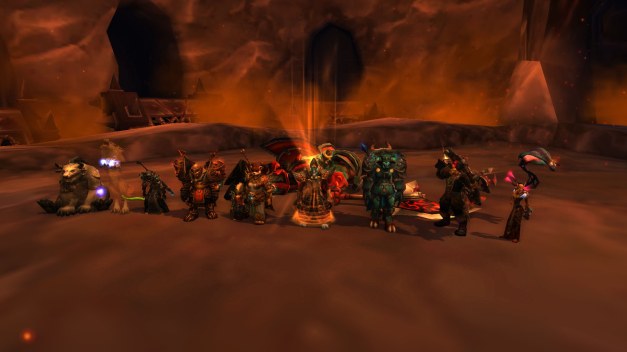 That was a nice raid night! We managed to one-shot General Nazgrim. No loot for me, but I’ll take progression over loot anyways!

We cut it pretty close at the end, which is always exciting.

Malkorok was a little harder. It took us five tries to down him. No loot for me this time either.

Next week we start at the Spoils of Pandaria. I think it’ll go smoothly, but we’ll see.

Additional information was posted in our guild’s kill announcement.

We killed the Kor’kon Dark Shaman as a guild for the first time yesterday! We extended last week’s lockout so we could start right on progression. I even managed to get a warforged mace off my bonus roll – Kardris’ Scepter.

See my post on the Carpe site for more details.

Wednesday we had our one and only attempt on Iron Juggernaut, defeating him! It seemed like a strangely uneventful boss. I’d heard it was easy, but after a boss that had a group leaving to do their own thing in the towers on Galakras with comparatively complex mechanics, I don’t understand why Iron Juggernaut was even there! That said, he’s pretty cool looking, so I guess I get it.

You can watch our kill too. I forgot to start the video right at the beginning, but I remembered pretty early. Now that I’ve become the official kill poster on the Carpe Flux Capacitor guild website, I might as well link to our official kill announcement too.

Last week we finally killed Galakras! We were missing our main tanks and actually had to PUG a DPS as well. It was the first time we had raided in about a month due to attendance issues.

This was our 20th attempt when we finally defeated Galakras. I’m surprised it took so long, but I’m glad to see him die. Off to Iron Juggernaut this week I hope!